In this post, I’ll be going over how to measure ketones, and some of my thoughts on breath ketone devices compared to a blood ketone meter and urine ketone strips.

So recently, I’ve been testing out a device that measures ketones in your breath. Those ketones are what’s known as acetone, and it’s been an exciting experience. So, Let’s get into it!

This post is sponsored by Qetoe. Also, just to let you know that Qetoe has also sent me this device free of charge.

Secondly, while testing your breath ketones using a device like this can be useful, it’s not a requirement for ketosis.

If you consume at or under 20g of carbs per day, you’ll be in ketosis regardless. Testing is for people who like to know the ins and outs of certain situations, but again, 100% not necessary.

I thought you recommended a different breathalyzer?

I did a video a few years ago about testing acetone in your breath using a cheap breathalyzer. Firstly, I was a little naive back then.

I didn’t realise the number of questions and complaints I would get through recommending that device. The device didn’t work all the time and gave confusing results that weren’t easy to understand.

So, this post and device will hopefully address some of those issues, plus get into some of the science as to why breath ketones might be a new measurement point.

Let me give you some simple science behind ketones because there seems to be a lot of people trying to match this device to a blood ketone meter, which is the wrong way to go about it. Let me explain.

In the human body, there are three types of ketones.

Acetoacetate is like the mother of all ketones. Its created in the body through the breakdown of fatty acids through ketogenesis, where 3 acetyl CoA molecules bond to eventually form Beta-hydroxybutyrate through an enzyme known as beta-hydroxybutyrate dehydrogenase.

This can also occur non-enzymatically to form acetone, which is then excreted in the breath.

Now, that might sound complicated, and to be honest, it is. The main thing I want you to take away is that when your body is using acetoacetate (the mother ketone), you are either generating BHB or Acetone.

So, there are 3 ketones. You might be wondering… but I thought there was only 1?

How do I tell if i’m in ketosis or not… How do I know if i’m going to be losing weight?

I’ll get to that shortly, but first, let us go over the 3 ketones, and highlight which testing mechanism is testing which ketone body.

As you know, there are 3 types of ketone testing methods. 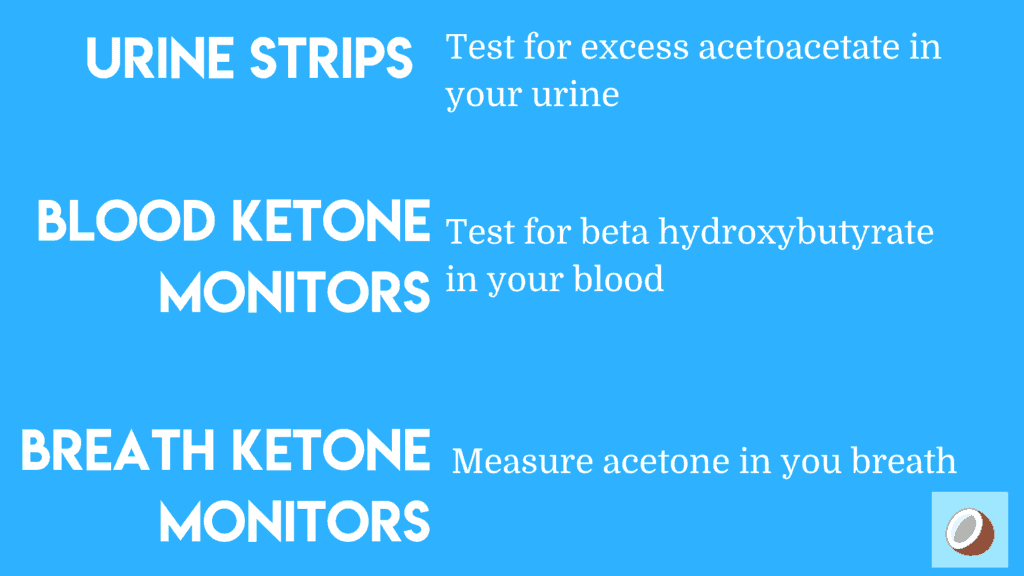 And remember, acetone is produced through the breakdown of acetoacetate. It is a ketone, but it’s not actually used in the body.

How do urine strips and breath meters stack up to testing your blood?

Well, the issue is that they are all testing different ketone bodies, so they will never match up completely. You shouldn’t be trying to compare them directly.

Okay, so which one should I be testing? Well, this is also affected by what stage of keto you are in.

In the first few weeks, sometimes even months when starting a ketogenic diet, your body will produce a surge of ketones that eventually diminish over time.

Why do they diminish? Well, your body eventually figures out how many ketones you need, and only creates as much as it needs.

If you want to know more about this, there is a fantastic interview that Mike Mutzel from High-Intensity Health recorded with Joe Anderson (PHD) that goes into much more detail about this process.

So for the countless videos out there explaining that pee sticks are not helpful, the reason why they don’t work after a certain amount of time is that your body stops removing acetoacetate (the mother ketone), and starts breaking it down into BHB and acetone.

Okay, so a blood meter must always show if you’re in ketosis or not, right?

Well, as many users have found, maintaining a level of nutritional ketosis might get harder and harder if you’re trying to measure blood ketones for the exact same reason.

A blood ketone meter is measuring how many free beta hydroxybutyrate ketones are present in your blood. It doesn’t indicate how much you’re actually using.

If your body has become more efficient at burning fat for fuel, then you’ll likely see reduced numbers on a blood ketone meter as well.

In saying that, BHB is a much more accurate test than acetoacetate because acetoacetate is an unstable molecule, which is why it can currently only be measured in your blood in a lab.

So, that brings me to the last method. Breath ketones, or known as acetone. Now, if acetoacetate is being broken down into BHB and acetone, and your body uses both acetoacetate and BHB, then trying to measure those numbers can be troublesome because you’re actually using them.

Blood ketones are much more accurate due to their limited volatility, but what about measuring acetone, which is not being used, only being discarded? 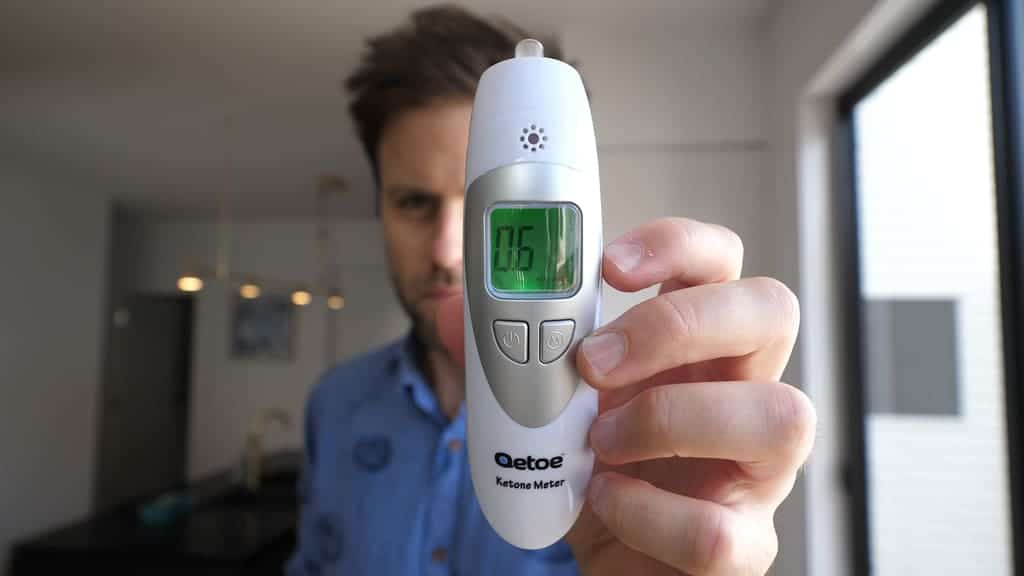 I did some testing over a few scenarios. Firstly, I wanted to kick myself out of ketosis to find out how quickly I would get back into ketosis, and secondly, I wanted to compare the values between the breath ketone meter and the blood ketone meter in certain situations.

So in my short 2 days, n=1 experiment, I noticed the following:

So, from my short testing, it seems as though using a breath ketone meter for me shows the most consistent readings. I’m either in ketosis, or I’m not. I also love that I don’t have to prick my finger every time I want to take a reading.

Which Way Should I Measure My Ketones?

So it’s worth mentioning here that if you are looking to test to see if you’re in ketosis, but it’s your first time, then any of the 3 measurements will work.

Keep in mind that because I’m fat-adapted, my time into ketosis was much faster.

However, if you’ve been keto for a while now, it might be worth getting either a blood ketone meter or a breath ketone meter.

The only downside to the blood ketone meters is most chemists only stock small amounts of blood ketone strips.

I’ve had some pretty nasty feedback from the diabetic community because “keto dieters” have been purchasing all the strips, and there is often none left for those who need to test in emergencies for ketoacidosis, which can be a very serious situation.

So, If you hate pricking your finger, this device might be an excellent option for you.

However, it does cost $100 and I don’t know how it holds up long term, since I’ve only had it for about 4 weeks.

Other devices are a little more expensive but are actually FDA approved like the Ketoscan Mini. It might be worth checking out Tara’s video over on Tara’s Keto Kitchen where she shows the difference between a few different devices.

In terms of a comparison between this device and others available online, again I’m not sure. I’m assuming this device uses a semiconductor sensor to detect acetone. The drawback to a sensor like this is that you cannot have any alcohol 24 hours prior to testing, and you have to wait at least 30 minutes after eating or drinking to test.

Here is a short rundown on how to actually use the Qetoe device.

You need to wait 3-5 minutes between consecutive readings.

Important note, try to blow through the device with a relatively empty set of lungs, as the first 125ml of air from your lungs will be what’s called “dead air”, often just the space from your air canals, not actually from your lungs.

I have linked the device and a discount code HERE in case you wanted to get one.