I get asked so many questions about substituting specific ingredients as keto substitutes, so I thought I could be helpful and create a post outlining replacements.

Please note, this post doesn’t go into the exact product brand details, because it’s not necessary. Most products are made up of similar base ingredients, and any differences would be negligible.

I have a general rule of thumb. I try to use liquid stevia (or monk fruit) were possible. I only use products that contain erythritol (sugar alcohols) when I’m trying to replicate the physical properties of sugar.

I only use products that contain erythritol (sugar alcohols) when I’m trying to replicate the physical properties of sugar.

For example, heating erythritol on top of a creme brulee will give a crispy, golden brown texture. This will not happen if you use liquid stevia or 100% monk fruit.

Another example is chocolate chip cookies. To get cookies to flatten in the oven, you have to use erythritol since it’s melting point is similar to sugar, and its granular texture allows the space between the nut flour to melt.

Keep these rules in mind. If a recipe specifically states that you have to use erythritol, use it. It doesn’t really matter that much if the erythritol is paired with stevia or monk fruit (it will simply be a little bit sweeter). 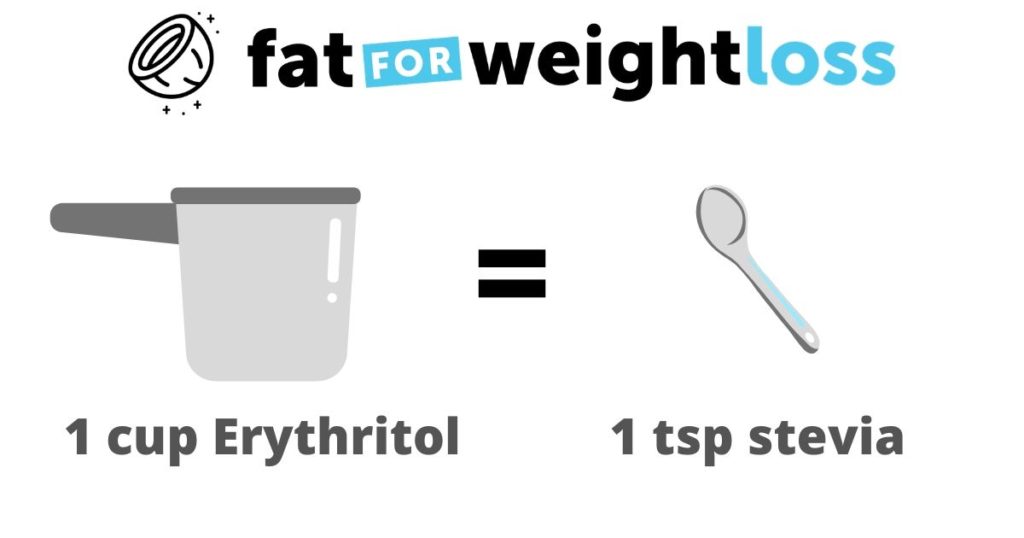 If you don’t like the bitter taste of stevia, then use monk fruit. These are interchangeable.

If you can’t find monk fruit, then use stevia. monk fruit is less sweet than stevia, so I always use about 1/3 less stevia than 100% monk fruit.

Combination sweeteners exist because sugar replacements generally have a weird after taste. By combining erythritol (minty cooling effect) with stevia (bitter astringent effect), the two are likely to cancel each other out.

The only combination I use a lot is erythritol and monk fruit.

The balance of monk fruit and erythritol neutralises the cooling effect of traditional erythritol, making it taste very similar to regular sugar and perfect for baking.

Erythritol is found naturally in fruits, vegetables, and wines. Monk fruit is a natural sweetener used in 13th-century Chinese medicine.

The glycemic index of monk fruit and erythritol is 0, meaning the carbohydrate content does not elevate blood sugar levels and won’t halt ketosis.

What to know more about keto-friendly sweeteners?

Read here about Which Sugar Replacements Are Keto Friendly?

Binding agents exist because the ketogenic diet eliminates wheat flour due to its carbohydrate content. A lot of recipes like bread, cakes, sauces etc rely on the gluten and starch inside wheat to help bind and thicken ingredients.

When you switch to using almond flour, or any other kind of nut flour, you no longer have gluten that will hold onto the flour particles, which creates crumbly bread, and desserts or cookies that fall apart when you touch them.

To fix this, there are a few different binding agents that when added to gluten-free flours will give you the same texture and hold as gluten does.

Xanthan gum helps hold low carb flours together. It binds the ingredients together and can act as a substitute for gluten.

Xanthan gum binds ingredients together and can act as a substitute for gluten. Gluten enables bread to rise because it traps air bubbles and allows them to grow. Xanthan gum can substitute by doing the same thing.

Make sure you use a gluten-free version of Xanthan gum, as most that are not gluten-free are made from wheat.

You only need a half a teaspoon for most keto low carb recipes. 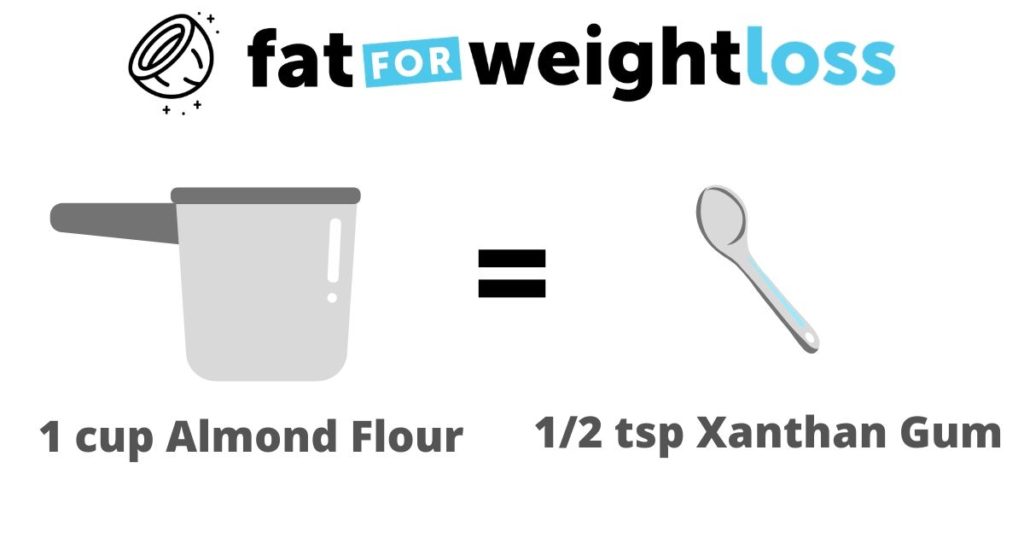 Learn more about xanthan gum here: Why use Xanthan Gum in Keto Cooking?

Guar gum is made from legumes called guar beans. It’s a type of polysaccharide, and has thickening and stabilizing properties useful in food such as keto baking.

Guar gum absorbs water, which then turns into a gummy substance which holds ingredients together and can act as a substitute for gluten.

A small amount of guar gum can go a long way: You only need about a half a teaspoon for most recipes.

Guar gum is helpful with digestive health (fibre), blood sugar levels (due to soluble fibre slow absorption rate of sugar) and has a cholesterol-lowering effect (as fibre binds to bile acids, eventual decrease in circulation)

Has been used in weight maintenance (cal-ban 3000) which was deemed dangerous in high amounts (much higher than you would ever use in baking) as it caused blockages in the esophagus and small intestine.

Gelatin powder is colourless and tasteless, and is derived from collagen and is made by dehydrating parts of animals, including skin, bones and tissue.

It acts like a sticky substance that can also help hold ingredients together, like gluten, but best used in cakes.

Gelatin improves get health and digestion, like collagen. Glycine from gelatin can help the mucus lining in the stomach and help balance your digestive enzymes.

It also protects joints, improves skin in a similar way to collagen.

Carnivore dieters should consider gelatin, as it neutralizes excessive methionine intake (which increases homocysteine levels).
Unlike collagen, gelatin creates a gell substance that is useful in cooking.

Agar-agar is made from Red Algae but is similar in structure to guar gum.

It sets like gelatin, but in a much clearer way. Best used in harder types of jellies.

Has been used in weight loss throughout Japan, and recently in the US.

Psyllium husk is made from seeds of Planto Ovata (mainly grown in India), and is the main ingredient in Metamucil.

Similar to xanthan gum and guar gum, it can absorb water and become thick, useful in baking bread rolls, or other bread that requires a high amount of rising, however, requires hot water to activate.

What substitutions would you like to see more of?

Leave a comment below with your questions, and I’ll add them to the list of substitutions so we can all bake better keto foods!